Good luck to him. But about time.

No ill wishes to him from me, hope it works out for him - but I'm glad I'll never have to see him stink out the pitch for us again.

He will probably do well in Bundesliga

He's done very well to get that move.
Ooh ahh Mustapha! 9 years of brilliance. Thanks a lot Muzzy!

Excellent news. Hope he’s flying and not taking a chopper. Still the main memorable thing about him. 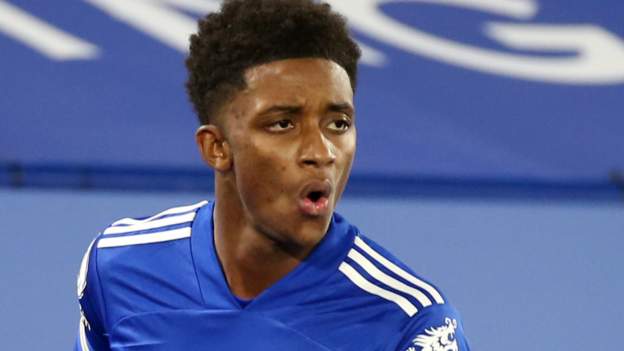 Bayer Leverkusen say they have signed English winger Demarai Gray from Leicester City on a contract until June 2022.

www.bbc.co.uk
Nobody can delete the history you wrote

that's a short contract he's signed there 18 months if he goes now or a year if its the summer, would have thought he would have gotten longer somewhere

Skitzo said:
that's a short contract he's signed there 18 months if he goes now or a year if its the summer, would have thought he would have gotten longer somewhere
Click to expand...

I assume he’s gone now, there’s talk of a fee

The 24-year-old, a Premier League title-winner with the Foxes in 2015/16, made a total of 168 appearances and scored 13 goals for the Club in all competitions.

Speaking to LCFC.com, Demarai said: “Today I say goodbye to a wonderful Club and family, which is how it is at Leicester City. I want to thank everyone at the Club who has helped me to become a better footballer.

“My debut and winning the Premier League have been unforgettable moments that will be part of my career forever, together with the goal against Cardiff. It was a privilege to score that and to be able to dedicate it to a wonderful man and Chairman, Khun Vichai.

“I’m ready for a new challenge now and I wish the Club and all my team-mates a future full of success.”

Gray joined LCFC from Birmingham City in January 2016 and made his debut later that month in an FA Cup tie against Tottenham Hotspur.

His top-flight bow came in a 1-1 draw at Aston Villa, and he went on to make a further 11 appearances in City’s historic Premier League title triumph that season.

Gray’s first goal for the Club came against Manchester United in September 2016, a campaign where he featured five times in the UEFA Champions League as the Foxes reached the last eight of the competition.

In November 2018, Demarai produced what will always be remembered as an iconic moment in the Club’s history - the only goal in an emotionally charged 1-0 win at Cardiff City. It was the Club’s first game after the helicopter accident that claimed the lives of the Club’s Chairman, Vichai Srivaddhanaprabha; staff members Kaveporn Punpare and Nusara Suknamai; and pilots Eric Swaffer and Izabela Lechowicz.

This season, he played twice for Brendan Rodgers’ side, and now joins a Leverkusen outfit who are currently fourth in the Bundesliga.

The Football Club would like to thank Demarai for his contribution and wish him the very best for his future career.
Monster Munch fund: https://talkingballs.uk/threads/forum-update.40339/#post-1393722

Surprise, the man who said Bamford couldn’t finish his dinner can’t spell the name of a player we’ve had for 5 years. Bellend.

Really hope it works for the lad. Good luck.

Same. I wanted him to do well but he just didn’t seem to kick on at all. Might just not be the right environment for him.

Good going getting that for a player out of contract in the summer who has only made 2 appearances this season.

I think he's had quite a lot of personal problems whilst he's been here too - I remember reading his house got done over, possibly whilst his Mrs was in there and sounded like it shook him up a bit.

Personally, I think there is a good player in there but he possibly didn't join us at the right time for him/we could have handled him better in that he's never really had a full season playing and a loan before now could have done him the world of good imo.

Seems like a fresh start in completely new surroundings is exactly what he needs and credit to him for taking the chance abroad as I'm sure there would have been a number of 'easier' options for him.

I always thought he seemed to give his all, just didn't quite work out here.

Will remember some good goals from him too - a lovely run and finish against Derby in the cup, the Cardiff goal and the stunner against Utd when I was still pissed out of my face from the night before in Malia and was the only City fan in a boozer full of plastic Mancs!
Our liquid lives, this is how we all survive.

I hope it's the change that motivates him to kick on. It was clear something needed to change. Best of luck to him, he leaves with my best wishes.

His whole career here has been a story of unfulfilled potential. We've reached the point where a move is best for club and player. Surprised we've got 11m for him. Glad to see him not move to another Prem side as well, we can wish him all the best because of that.
We've had more managers than you've had hot dinners...

5 years of mostly a load of wank.

Should have taken that £20m from Bournemouth when we had the chance.
There are 10 types of people in this world; those who understand binary, and those who don't.

City Fan said:
5 years of mostly a load of wank.

Should have taken that £20m from Bournemouth when we had the chance.
Click to expand...